I would, and I did go.  For me, I don’t carry the typical view of Americans incarcerated like the description above.  From years of working with youth, I have watched children learn from violence, addictions and unstable environments.  I have seen them removed from their homes and placed in worse conditions in some foster-homes and group homes.  I have noticed the pattern of getting in trouble with the law starting early in life when kids don’t have proper role models.  I have observed the discrepancies which take place in how youth are dealt with based on race and socioeconomic backgrounds.  I have been disappointed by the influence mental health has on effecting behaviors which get ignored in the judicial system.  I don’t judge youth as being bad seeds, I can see the good in them and understand who they have become is a reflection of what they have been through.  They way kids think, speak and behave couldn’t be any different.  They honestly don’t know ‘better’ it’s the only way they know how to be.

It’s easy for us to have pity on children and have sympathy for the situations they have been through.  Why does this stop with children?  We accept kids don’t know better, and somehow by the age of 18 magically people should now know right from wrong, how to handle anger or cope with stress, how to create a substantial income legally or who to trust not to lead you down the wrong path?  It’s hard for me to buy this, if their circumstances were different I know their actions would be different too.

In America we have established a system of ridiculing, harshly judging and locking up victims of unfair circumstances.  Victims of abuse, addiction, trauma, poverty, learning disabled and mentally ill.  Justifying the incarceration of hundreds of thousand non-violent offenders.  Encouraging wealthy investors to build prisons and profit off the contracts to incarcerate some of America’s most oppressed population.  This is occurring at such alarming rates we are leading the world in locking up our citizens. 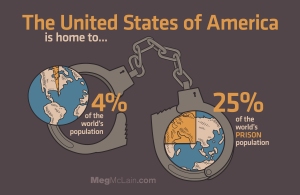 From a class I recently took, volunteers were invited to attend a prison and visit with the inmates as a celebration of Vesak, a Buddhist holiday celebrating the birth, enlightenment and death of Buddha.  (For my first story on this click here.)  On the day of the prison visit I felt nervous, not in fear it would be dangerous, it was more related to how I would manage my own frustration with the prison system and maintain equanimity through the experience.  It wasn’t until I showed up for the ride to Leavenworth when I found out we would be going to the U.S. Disciplinary Barracks, the Department of Defense’s maximum security military prison.  According to Wikipedia: Only enlisted prisoners with sentences over ten years, commissioned officers and prisoners convicted of offenses related to national security are confined to USDB.  As I would later hear from the inmates, this is the most dangerous prison in the United States since all of the inmates are trained to kill.

To me, this visit suddenly took on another level of social justice problems.  These inmates were more likely to be incarcerated for violent crimes, yet I still hang on to the notion they are also victims of their circumstances.  Being in the military trains them to be violent, asks them to go to war and causes them to witness unimaginable trauma.  It is impossible not to be effected by these circumstances, and many individuals are mentally unprepared to cope.  The military has seen a substantial increase in the rates of domestic violence, assault, murder and suicide in the last ten years – directly related to tours in Iraq and Afghanistan.  Countless enlisted men and women joining the services to serve and protect their country end up with their lives ruined by war.

On the drive to Leavenworth I road with a fellow classmate and talked about gardening, TV shows and travel.  We shared our anxiety about what we were going to see and I confided I desperately wanted to know the circumstances of each of their crimes and what lead to them, even though I knew I wouldn’t ask.  We presented our id’s at the gates to Ft. 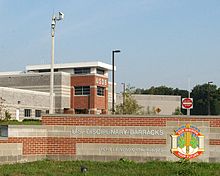 Leavenworth and caravaned with other vehicles through the base up to the prison.  It seemed to be the furthest possible location on the grounds passing officer’s homes, army barracks, a cemetary lined with identical and symmetrical tombstones, down long winding roads, dead-ends and finally approaching ‘The Castle.”

We entered into a quiet building about 7:15pm and climbed a staircase to a front desk manned by two guards in combat uniform.  The lobby felt like a high school with lockers, restrooms and a seating nook overlooking the dense wooded area beyond the parking lot.  We each had to be cleared with a background check ahead of time and present our identification to get a visitors badge.  Our group of 15 people were escorted by another guard, entering only a few at a time.  One giant glass door slamming locked behind us so the next giant locked door could open.  After the breeze way another guard with a baby pimpled face asked if the first guard would need assistance escorting us to our meeting room.  I was sure these two finished their varsity sports, attended senior prom and put in resignation at McDonald’s about 12 months ago before heading off to boot camp, completely unaware of the commitment they had made and how deeply it would impact their life.

We walked down a long corridor, passing metal doors with small glass windows to other wings of USDB, it reminded me of entrances to different sections of the state mental hospital where I used to work.  There were some inmates passing us in the hallway, none were handcuffed or escorted, and I got the impression I wasn’t in danger being there.  We entered a room, about the size of a classroom with two long tables set up for us to eat and visit.  The prisoners we would be visiting were already in the room and waiting spread out amongst the folding chairs.  I shuffled in shyly with the other guests, waiting for instructions which never came.  Eventually assuming the responsibility to find a spot to sit down and introduce myself to those around me.  My classmate and I sat down next to each other for some security and comfort.  We overly smiled and shook hands with the prisoners across and next to us and then felt the awkwardness sink in unsure of what to talk about.  I bit my tongue to prevent the question of “What did you do to get here?” from blurting out.

At the start I was painfully conscious of my body positioning and every word I uttered into conversation.  We shared how each of us started taking the Basics of Buddhism class, both those from the outside and those from within the prison. We related on why we started a meditation practice and how the practice was going.  The prisoners shared the need for meditation to help calm their minds down, cope with emotions and come to terms with being at USDB.  During dinner I felt by apprehension fading and my body relaxing.  Two of the prisoners I had met were born in other countries, one joining the Navy from his home in California and was last stationed in Hawaii, never imagining he would end up incarcerated in Kansas.

Another prisoner I spoke with told me about being from the East coast, stating he quit college half way through to join the Marines.  He had been enlisted for almost a decade, traveling the world and completing three tours to war.  We discussed the paths of life, influences which shape us and how everyone makes mistakes.  “It would be boring to be perfect,” he remarked, “No one is perfect.”

“Everything is perfect,”  I challenged his view.  I explained my perception, nothing could be the way it is now without everything else which fell before it.  Perfection is neither good nor bad, it is just as it should be.  We couldn’t have been at the table meeting each other in USDB had any circumstance in his or my life been different leading up to that day, not good or bad, just perfect.  The veteran agreed and said he has become keenly aware of situations in his life, choices he has made and what has lead him to where he is at right now.  He feels it is exactly what was supposed to happen and put him in touch with life again.  We talked about people who are aware of their past, intention and purpose.

“And then there are the floaters,” he said.  “Don’t get me wrong, I was a floater for a long time too.”  From the discussion I took that a floater refers to a person who is existing with indifference to themselves and the world around them.  Someone who is oblivious to their impact or lack of impact on others.  Individuals who don’t carry attachment to relationships and situations, rather busying themselves with getting by in life without thinking or place value too highly on material things.

There are victims of crimes and then there are the criminal victims of circumstance.  Their actions are not legal and are not to be condoned, yet our judicial system is not creating a healthier society.  The problem will continue to perpetuate as long as there are floaters unaffected by what is happening and stay disengaged from these conditions in society.  We need to help each other wake up to stop judging criminals, change the criminal system and correct the errors which lead individuals to do bad things.

If this post peeked your interest and you want to learn more, here is some recommended reading:

The Prison Industry in the United States: Big Business or a New Form of Slavery?      From Global Research

Locked Away, Army Struggles with Wounded Soldiers     From The Gazzette

I’d also recommend checking out The House I Live In a documentary regarding the war on drugs:

Finally, out of curiosity: Have you ever been a floater and what helped to wake you up?