The day of the wedding finally arrived.  I readied my little girl to her finest curled perfection and dressed her in the fall colored dress my mom made for the occasion.  I left Parker with my husband and dad so the ladies could all hurry off to my sister’s cabin in the woods.  Thank goodness she happened to pull up the country road behind us to follow her through the winding twists and turns we would never have found on our own.

Heather was radiating with bridal thrills and couldn’t wait to get the ceremony and celebration started.  My sister-in-law immediately went to work on her hair spraying, twisting and pinning.  Her soon to be sister-in-law prepared mimosas, because what bride prep wouldn’t be complete without some champagne?  My sister’s NY family/friends had made amazing individual gift bags of products, I

shamelessly would never be able to justify buying on my own.  Although I had already gotten dolled up back at the hotel, I wanted to start over with my new colors…  Instead I took pictures and waited by my sister as her cup holder.

Once hair was set and make-up applied, my mom assisted Heather with putting on her dress.  While dress shopping I warned my sister not to find one too fast and to let Mom help with putting it on.  I remembered back to my own dress shopping, my mom was loving trying on dresses more than me.  Not just looking at them, the actual helping wrestle into them, lacing, zipping and adjusting.  I felt like I was taking a favorite hobby from her when I decided on one dress.  I knew that moment between my mom and sister was a special one, the final time she would be zipping up a daughter, I’m sure one or both of them had a tear.  She emerged from the bedroom, adorn with her beautifully simple satin gown to admiration.  Her soon to be mother-in-law helped with the finishing sentimental touches; jewelry from each of the grandmas who wouldn’t be physically present for the day.  Upon final observation at herself in the mirror the bride reported “Damn, I’d marry that.”

All of the guests were present when we arrived at her fiancé’s uncles’ cabin.  It was just the atmosphere they had planned, immediate family and a few close city friends on a cool fall day.  The party was underway as many guests had already poured drinks and were enjoying each other’s company on the deck.  Heather did a little touch-up in the bedroom before meeting our dad on the side of the house ready for her big entrance.  Guests found their seats, Parker and her cousins were ready in their claimed row holding hands.

My sister was stunning and my dad proud as they walked through the row of pumpkins, up the steps and down the aisle towards her waiting groom.  I wondered if he was as shocked as we all had been when she decided to wear a veil, if he was it was masked by the expression of pure happiness when he saw her.  The ceremony was officiated by her fiancé’s uncle, and he spoke to how honored he was to be asked and to be able to share his cabin for the event.

Following the ceremony, traditional wedding pictures were taken.  I acted as the photographer, keeping within the conditions they didn’t want strangers as part of the day at all.  They report they love the pictures, however, it was crazy anxiety provoking to know the pictures they will look back on FOREVER from this day are

I promise there were a lot more wedding pics and they are my sister’s to have.

ones I am responsible for or responsible for messing up.   And simultaneously with pictures the party began.  A full bar, lawn games, socializing, adventures in the woods and crafts for kids, appetizers and dancing on the deck.  Once pictures were taken, some suits were replaced with jeans.  My husband also wanted to participate in dressing down, except his hodge podge of what he happened to bring must have been frightening to our company of high-class New Yorkers.  Imagine dress shoes, funky dress socks, light blue shorts and a black college hoodie.

With my sister living half a country away, I was removed from all she had been doing with wedding details.  Her attention to including grandparents into the day was thoughtful testament to how much they both appreciate their families.  On her bouquet was a thread of small pictures of four sets of grandparents. 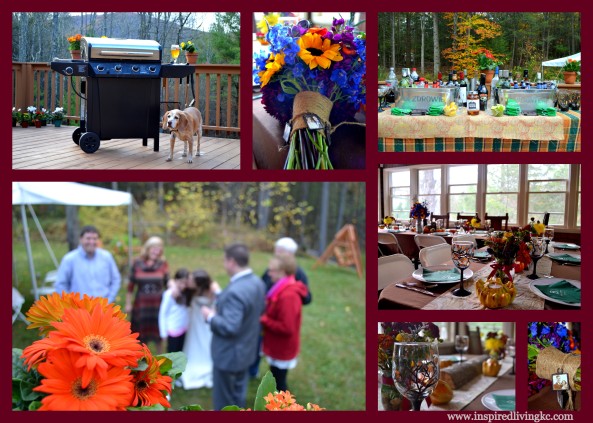 Heather hand painted wine, martini and brewery glasses with trees and fall leaves especially for the day.  Inside the cabin it was clear she spent a huge effort on exactly how she wanted the tables to appear with table cloths, runners, flower arrangements, and candle holders created the day before out of split logs and gourds.  And just like there was no professional photographer, there was no professional caterer, although you would think the fajita dinner was professionally done.

Since Parker already adores her uncle and his family, I was thrilled she would be able to meet his other significant family there.  It was a magical evening to watch her and her cousins interact with his family as if they had known each other their whole lives.  Throughout the day and into the night laughter and happiness came from two people and their families, the pieces fit just as they were meant to.  It was comfortable, intimate and personal just as they had been planning.

On Sunday, we figured since we had made our way to the Catskills of New York, we would need to visit Woodstock.  Disappointed by the fact that the actual farm where the hippie festival took place is not even near Woodstock, we still enjoyed the town, the hippie shops, hippie restaurants and hippie signs warning to STOPFracking.  My husband, parents and child found our way to the Woodstock Flea Market where we searched for an inexpensive replacement wedding band for my husband and settled for a hippie-toy guitar for Parker.  What could be more fitting as a souvenir from Woodstock?  We made one last rendezvous with the married couple before they headed back to New York City.  It would only be a few more days before we’d see them again for more wedding celebrations back in Kansas City.

Psst, pass it on:

Thank you for reading and adding your thoughts. Cancel reply