Trying to eliminate unnecessary clutter, I began sorting through an old box of letters.  I believe I have unnecessarily saved every letter, folded school note, and card I apparently ever received, thus creating plenty of unnecessary clutter.  Going through old mail is like a time capsule of my life and while I can purge a lot of junk, some of these treasures I just can’t let go.  At least if I clutter some internet space with it, I might be able to let go of the paper.

This card I got from my brother while I was away at Girl Scout Camp.  It was a thrilling feeling to hear my name called to get mail, even if I was only away a few days.  And in his most careful cursive (probably the best handwriting I have seen from him – even 20 years later) he wrote a sincere brotherly note. 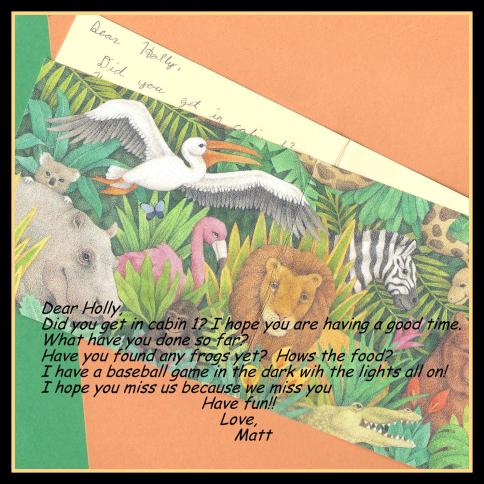 Girl Scout Camp was full of songs, hiking back and forth across camp grounds and giggling with new friends.

I remember feeling like tiny frogs blanketed the grass outside of our cabins.  If they had been crickets I might have run screaming between the cabin and the bathroom across the grassy knoll.  Since they were amphibian creatures, and babies at that, I carefully took every step to make sure they got to hop to safety before my monstrous 9-year-old foot reached the earth.  Not only was the frog population so high, I can’t forget about the sheer numbers of fish in the lake either.

For each day at the camp, our group would have a rotation at the lake for swimming.  On the first day it was required to swim from one dock to the other for the lifeguards to judge what level swimmer we were and how far we would be allowed to swim in the lake.  I was overly confident about my swimming abilities as I jumped in for my test.  Immediately I began feeling not alone in the water, one object brushing against my leg, then another and then my arm.  With every kick and paddle through the water I was feeling fish also trying to occupy that space.  My easy aquatic technique quickly turned to floundering to stay afloat, slowly making my way to the other dock disgusted by the lake and its fearless inhabitants.  Despite my uneasy approach they gave me permission to swim to a certain distance in the water to which I said “No thanks.”  And stayed on the beach.

Psst, pass it on:

Thank you for reading and adding your thoughts. Cancel reply